It’s impossible to create high-quality content outside a video studio. If you’re a rising star on the YouTube scene, you’ll sooner or later need a professional studio. But how much does it cost to make one?

If the numbers sound staggering, that’s because they are. But then again, producing professional videos can cost up to $5,000 per minute. This article will break down the cost of building a video studio and how to reduce it.

Why Video Studios Are So Expensive

Video production today has a lot in common with movie production nowadays.

That’s why a professional video studio has essentially no upper cost. It’s near-impossible to build an amateur video studio without at least investing $10,000 to $20,000.

The size of your video studio affects the price the most. A good point of reference is the cost of building a home. An average house costs $100-$200 per square foot (0.092 sq m) to build.

Your video studio will cost about the same. Add the price of acoustic treatment, better lighting, and equipment to this.

We’re all too familiar with top-notch video studios that professional YouTubers have – they’re larger than an average house!

Chances are, you’ve stumbled upon at least one studio tour. Professional studios are astonishing even without taking the fancy equipment into account.

If you haven’t, a good example is MKBHD’s Studio Tour, which you can watch here:

Building a Studio From the Ground Up vs. Adapting an Existing Area

If you want to build your video studio from the ground up, it’ll be pricey. That’s why many people convert an existing room or garage into a video studio.

When building a video studio, you can probably skip out on having to pay for the plumbing.

However, you’ll still have to contact your local electricity distribution company. You will also need to hire an architect and get a building permit before you start.

And when you do, things only get more expensive. You’ll need to get the lumber frame, drywall, flooring, and roofing built professionally, and that will likely cost thousands of dollars.

That said, all of this may be worth the additional upfront costs. You can customize it to your liking, and the layout and the acoustics will be perfect for video recording.

If you’re only getting started with video production, it’s best to keep costs low, at least until the studio can pay for itself.

Adapting an unused room or a part of it will be much cheaper. You could build a partition wall to divide your room or convert the garage instead.

To better understand how much it costs to build a video studio, I’ll briefly explain all major contributing factors.

If you’re planning to build one from the ground up or expand or adapt an existing room, this will help you get a rough estimate. So, let’s get started.

To build or modify any kind of building on your lot, you’ll need a building permit. A building permit is a document granted by the government that allows you legal construction.

Pretty much any state requires a building permit if you’ll be building or heavily modifying your house or garage.

You’ll also need a permit for electrical, roofing, plumbing, HVAC, construction, bathroom, window, and so on.

You can cut the cost down significantly if you’re only paying for the garage conversion and nothing else.

If you’re going to build a whole new building for your video studio, you’ll need a lumber frame and drywall.

This is probably the priciest part of the whole project because you’ll have to factor in labor as well.

You’ll also need drywall if you’re dividing your garage. Reserve one part of the garage for your car, and the rest will be your new video studio.

The price goes up significantly if it’s a separate building. Framing with studs and drywall costs about $20 to $30 per linear foot.

If it’s just one wall, you’ll probably spend about $1500-$2000 with labor, depending on the length. Multiply the number by four to get the price of a new building.

Even a tiny studio will put you out at least $8000 for just the drywall and framing lumber.

The flooring in your new studio is an important factor. It’ll show up in all of your videos, and it affects the acoustics of the room.

The flooring price depends largely on the material and labor. Let’s look at laminate as an example. It’s easy to roll your office chair on it, it looks good, and it’s cheaper than hardwood.

Insulation in a video room is incredibly important. It’ll keep you warm in winter when you’re editing your videos. It’ll also improve the acoustics in the place slightly.

Again, materials and labor play a huge factor in pricing. It’ll cost about $1.00-$5.00 per square foot to insulate your new video studio.

A video studio needs a lot of electrical outlets. So, you’ll need to spend a lot on electrical work and wiring too.

You have to plug in your camera battery charger, computer, phone charger, speakers, monitor, and lights.

Never skimp on electrical work, especially in a video studio. You’ll have to spend anywhere between $500 to $1,000 to route all the outlets, switches, and wiring through the walls.

Adding ductwork from your existing HVAC system to the new video studio costs a few hundred to a few thousand dollars. It depends a lot on how far the main duct is from the studio.

Installing a complete HVAC system in a studio doesn’t make sense from a financial perspective. It costs at least around $15,000.

So, you’re better off skipping the HVAC altogether or getting a smaller standalone unit. Expect to pay between $300 and $800 for a basic portable AC.

The thing that always stands out in any studio compared to standard rooms is all the acoustic foam on the walls.

Acoustic foam and bass traps drastically improve the sound quality that you record in the room.

Plus, the studio will look way better and more professional in videos, which adds to the overall impression of first-time watchers on your channel.

That said, acoustic treatment goes further than carefully placed pieces of foam on walls. You also have to factor in smooth walls, windows, the floor, and even the ceiling.

Professionally done acoustic treatment costs thousands of dollars. It depends a lot on how far you want to go and how large the room is.

If you don’t mind DIYing it, it’ll likely cost you about $500-$600. It’ll greatly improve the sound quality of the place.

You may also want to invest in a soundproof door, which will set you back an additional $600-$800.

You’re probably familiar with stand lights used in video recording and photography. They come attached to tripods so that you can get natural-looking lighting.

Good lighting is what makes the difference between a hobbyist and a YouTuber.

So, you’ll need at least two professional video lights for the videos. Prices range anywhere from $150 for beginner kits to $1,500 for high-end lighting.

However, that’s only for video recording. You’ll also need a light fixture or a couple of light bulbs in your studio.

Since this is a video studio, you’ll also need a ton of RGB in the form of led strips, smart bulbs, and panels.

High-quality RGB panels cost about $30-$40 per piece. You want at least 10-15 pieces to impress your viewers.

When you add the total lighting costs (excluding the video lights), it’ll likely cost around $400.

Last but certainly not least, we have filming equipment. Professional cameras like the RED V-Raptor start at $24,500. And that’s just for the body with the sensor.

A more reasonable estimate for professional cameras is somewhere between $5,000 to $10,000.

A professional shotgun microphone that people use in a video studio is about $400-$1,000.

Of course, beginners can use their phones as a camera in the beginning. However, a decent microphone may still cost you about $50 to $100.

How To Reduce the Cost of Building a Video Studio

If you’re planning to build a new video studio, there are a few things that you can save money on. The following few tips can help with that.

Cheap Out on Acoustic Treatment

Professional acoustic treatment is out of reach for the vast majority. If you don’t have a professional video studio, I strongly encourage you to get some acoustic panels.

You can try the HPKL9999 48-pack 12″ x 12″ x 1″ Acoustic Panels from Amazon.com. They’re fairly inexpensive, but they’ll greatly improve the sound in your videos. 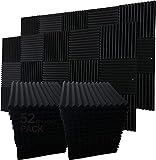 If you don’t know how to install them, the following video by Lonely Rocker can help:

Get LED Strip Lights for Lighting

Smart RGB bulbs and panels look great in videos, but so do light strips.

Light strips are a fraction of the price, allowing you to spice up your video studio with some inexpensive LED strips.

Mount the strip to the wall or desk behind you, and you’ll have a decent-looking background for less than $20.

Adopting an existing HVAC system for the studio is already expensive. Buying a separate unit, even more so.

So skipping it altogether will greatly reduce the cost of the studio. It’ll be cold, but video quality won’t suffer from the low temperatures.

This is kind of cheating, but renting a video and/or hiring a crew is much cheaper than building a new studio in some cases.

It especially makes sense if you don’t record new content regularly. It allows you to promote your business (or yourself) with quality recorded content without forcing you to invest tens of thousands of dollars upfront for a studio you may never use again.

Transform Your Garage Into a Video Studio

All things considered, your garage is the most likely candidate for a new video studio. Aside from the permit, you won’t need anything special.

It’s one of the cheapest ways to create a video studio. Additionally, if you already have HVAC in your garage, you won’t have much trouble modifying it for a cozy studio.

After treating the garage for acoustics and making it look like something other than a garage, you’ll have a decent makeshift video studio.

The bulk of the cost of building a new video studio lies in creating a new space. If you already have an area to work with, transforming it into a studio will be significantly cheaper.

Here are the most important things to pay attention to when building a video studio:

link to Why Is Your Blue Yeti Mic Echoing? 5 Causes and Fixes

The Blue Yeti microphone is popular for streamers, podcasters, and musicians who record or broadcast from a home studio. Features like multiple pattern selections and plug-and-play connectivity to...