If you’re setting up a vocal recording studio, you want to get the right equipment. You might have heard about condenser mics, as these super sensitive, vibration-based microphones are excellent for recording vocals. But they’re also powered by phantom power, so does that mean they need a preamp?

A condenser mic needs a preamp. Condenser mics require an outside source of power, generally provided by a preamp. They also help convert the sound from the mic to the amp. Preamps can come as part of a microphone, in an audio interface, or be purchased separately.

In the rest of this article, I’ll tell you how a preamp works and why it’s necessary for a condenser mic. Powering a mic is essential, but so is the sound conversion a good preamp provides. I’m also going to detail the different kinds of preamps and which is best for your recording needs.

A condenser mic doesn’t need a preamp by definition, but a preamp is usually the source of power for this kind of microphone. It’s pretty rare to find a source of phantom power that’s not an external preamp, but it does happen sometimes.

Although it might sound expensive to add a preamp to your recording setup, you might not need to purchase anything extra. Most, if not all, audio interfaces and mixing boards come with at least one preamp built-in. If you’re beginning, you generally don’t have to look for anything fancier than you might already have.

Why Preamps Are Necessary for Condenser Mics

Condenser microphones, unlike dynamic mics, need a separate power source to run. They record vibrations with two metal plates. As the sound waves bounce between the stiff and mesh metal plates, they create an electrostatic charge to register. This gives them a more transparent sound and better recording of details.

Condenser microphones need phantom power to record. Phantom power seems like a complicated concept, but it’s pretty simple. It’s an electrical charge from the relationship between the microphone and the mixing board, called “phantom” because it has no external source.

The relationship between the mixing board and the microphone is generally in the preamp. A preamp provides the charge for phantom power, causing the condenser microphone to record sounds. The preamp also brings the sound levels of the microphone up to the proper levels for recording.

Functions of a Preamp

Preamps do more than keep a condenser mic powered on and recording. They work the same way for other instruments as well. Depending on the preamp, they’ll adjust the line levels of the sound for various microphones and instruments and add color and tone to a recording.

The line level is the lowest level of sound that a line input can take in. Anything lower than 0 DBV (one volt of sound) is impossible to pick up with the line inputs from the microphone to the mixing board. Microphones naturally give out about one-tenth of the necessary volume to register and record.

Preamplifiers bring up the volume of the sound waves before they get to the mixing board. The preamp performs an essential function in the recording setup because of the inherent difference in microphone level and standard line level. For any microphone, a preamp of some kind is necessary.

There’s usually a switch on the side of a preamp outlet to toggle phantom power capabilities.

Check out my article about whether Focusrite Scarlett Solo is a preamp.

The two main kinds of preamps, musically speaking, are clean microphone preamps and colored microphone preamps. The difference between these two primarily comes from how they affect the sound being recorded. Both bring the microphone’s noise up to line level, but they go about it in different ways.

A clean microphone preamp records the sound as cleanly as possible for a neutral sound. It records the music without adding any color or character. A clean preamp is generally pre-installed on any audio interface and works well for beginners and advanced musicians.

A colored microphone preamp will vary widely – like different amplifiers and the character they bring to recording, a preamp can give a specific tone or vibe to a recording. Many advanced recording artists like to mix and match certain preamps to add style. It doesn’t make a difference in actual sound quality.

Choosing the Right Preamp for You

There are only two different kinds of preamps, but many more options for purchasing preamps. What you buy largely depends on your recording needs. If you’re just beginning, the preamp installed in your microphone, audio interface, or mixing board will work just fine. However, a professional might need a separate preamp setup.

The different preamp setups vary in price and performance. If you want a colored preamp, you’ll have to spend a bit more money to access the different tones in your recordings. The most important part of a preamp is not how clean it is, however. More than anything, you are looking for quality.

If you’ve already bought your condenser mic, you’re going to need a separate preamp of some sort. Some condenser mics come with built-in preamps, but these are generally weak sound boosters and need an extra push to make it up to the average line level.

If you already have an interface or don’t want to buy one, you can invest in a single-microphone preamplifier instead. I recommend the MXL Preamp (available on Amazon.com). It’s made specifically for condenser microphones and is easy to plug into a microphone and USB. This tool is ideal for those who only want to record with a microphone and computer.

If you’re just beginning to record, you’ll need an audio interface, even if it’s a straightforward one. These tools help bring the recorded sound from the microphone to the computer or amplifiers. Audio interfaces vary in size and price, but if you’re registering with more than one input (instruments or microphones), it’s wise to buy one with more input and output openings! 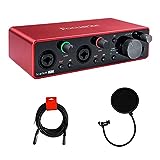 If you’re just looking for a simple audio setup, you don’t need to buy a separate preamp box to record. Your condenser microphone and audio interface will connect and record perfectly well. However, if you want to start experimenting with various sounds, I recommend the PreSonus Preamplifier as a starting point.

A condenser mic needs a preamp to bring its volume up to line level and to provide the phantom power required for the mic to work. Although you don’t need to spend extra money on a separate preamp setup, you’ll want to make sure you buy an interface or mixing board with a few quality preamps.