While the internet has made music distribution more effortless than ever, hobbyists and emerging artists still struggle with recording high-quality vocals for their songs and covers alike. However, the solution requires nothing but USB access and a good laptop to record your upcoming hit.

The Blue Yeti Mic is good for singing because it allows you to control the sound’s direction and how much sound you let the mic pick. Most importantly, you can plug your headphones into it and hear yourself (which is essential for singing). And best of all is that it is a USB mic!

Below are some of the advantages of this USB mic: 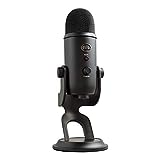 While the mic has its advantages, there are two key drawbacks you must keep in mind before making your purchase:

Why Is the Blue Yeti Worth It?

The headphone jack’s simplicity is another fantastic feature that makes it easy to monitor your recordings. A singer has to stay consistent in terms of performance, quality, and time. A crucial part of the process is to replay their voice recording to pick up on any flaws or audio fluctuations and improve them instantly.

The Blue Yeti Microphone offers a solution to that problem; at the bottom of the microphone is a headphone jack, allowing latency-free and real-time monitoring so that any audio-peaking can be detected easily, allowing you to hit that note perfectly.

On the back of the microphone is the gain control knob that essentially makes it convenient for users to adjust the microphone’s sensitivity while a recording is in session. For instance, if the audio begins to peak, it can easily be controlled by dialing down the knob. Usually, a software would be needed to adjust this, which would be challenging to do during recording.

Mute at Your Convenience

The mute button allows the user to stop the recording when needed temporarily. This feature is not often found on most USB microphones. This feature ultimately saves time during editing, avoiding the hassle of having to crop away parts of the audio and instead ensures a seamless, continuous recording session.

Check out the BEST ASMR MICROPHONES.

Why You May Not Buy a Blue Yeti Mic?

Now, let’s talk about some of the downsides.

While the sound quality is unquestionably exceptional for the price point, people looking to get an in-depth sound quality with more advanced features should invest in something else.

Check out how this AmazonBasics mic compares with the Blue Yeti here!

Who Should Buy a Blue Yeti Mic?

For YouTube singers looking to upgrade their tracks in terms of quality without having expert experience in handling microphones, the Blue Yeti might be the perfect fit. It will set up easily next to your laptop on a desk without having to move around or invest in microphone stands.

Controlling the audio is easy, with most of the features already being accessible directly through the microphone itself. The audio converts and uploads itself onto your laptop without any extra audio-interface, so you can skip out on any additional investment or steps when it comes to setting up or editing.

With that being said, it is also perfect for those on a budget or those who are not looking to invest too heavily in equipment. The added benefit of not having to purchase any audio-interface, cables, or maintenance expenses makes it all the more attractive for those who simply record demos for their YouTube channel or people recording podcasts within their rooms.

The Blue Yeti microphone is ideal for podcasters. It offers a tri-capsule microphone array that allows for four different polar directions. The Cardioid mode focuses on picking up sound from the front while blocking out any noise from all other directions allowing the user to customize their session according to their needs.

No longer do you need to spend extra time setting up an additional microphone or gear. The Blue Yeti does it for you, and all you have to do is change the setting, which is done through the knob at the back of the microphone.

It can be said that the Blue Yeti microphone is the right fit for someone who wants to skip out on all the complexities of recording equipment without compromising on quality.

Its polar directional recording capabilities and the easily accessible buttons placed around the microphone make it easy for adjustments to be made even when recording.

Check out how the Blue Yeti compares with a budget Amazon Basics microphone here.

link to TRS Cable Noise: Why It Happens and How To Fix It

If you're an audiophile, EDM fanatic, or musician, you might be familiar with TRS cables. Or, perhaps you're working with some new audio technology and experiencing a humming or buzzing noise from...

It's rare for a person to get their big break into the music industry right away. As a matter of fact, Bruce Springsteen, Beck, and other famous artists started their careers recording music in the...