The mixing room and recording studio have several differences. Both rooms have unique features that make them suitable for recording and mixing. Otherwise, artists and mixing engineers will not perform as well as expected.

The primary difference between mixing rooms and recording studios is their ability to block unnecessary sounds, frequencies, and dynamic ranges. Unlike recording studios, mixing rooms need to be altered so that impurities, such as echos and background noises, are isolated and removed in recordings.

Recording and mixing rooms are specially prepared to support the artists’ vocals and to ensure the track is free of imperfections when it is released. This article will show the differences and why so much effort goes into making these rooms perfect.

Differences Between a Recording Studio and Mixing Room

Music recorded in a recording studio is different from that produced in any other room. The unique features of the recording and mixing rooms are the reason for the high quality sounds.

Sound and vibration reflections are a concern in recording rooms and mixing rooms. However, since the mixing room is used to analyze unwanted sounds that infiltrate the recordings, mixing engineers prefer working without interference from external sounds.

Check out this YouTube video to learn more about reflection points:

Acoustic treatments in recording rooms tend to focus on the entire room. The floor, walls, and ceiling affect the sound quality. If this room is not treated to reduce reflections, the mixer will have a harder time identifying the interruptions in the recording.

Additionally, if the recording room had no acoustic treatments, the recording may not be satisfactory. The artist and sound engineers will spend a lot of time improving sound quality when the problem is not the artist but the room.

The design concept of a recording room is different from that of a mixing room. When designing a mixing room, stereo balance is critical. This is best achieved by making the room smaller. This will reduce sound distortions.

It is also easier to create a fixed reflection point when working with a small room.

A room with the same measurements, a perfect square, is unsuitable for mixing rooms. Sounds and vibrations easily bounce when they can move in a straight line, back and forth. You can create angles to break the movement by placing furniture in strategic areas.

When using one room as a recording and mixing studio, a mixer is isolated in a smaller space that is acoustically treated to control sound reflections. A small mixing room condenses the sound and reduces echos.

Space is not a big issue in recording studios. The studio can be as big as you want. However, the walls, floor, and ceiling require acoustic treatments.

The recording room and mixing room have different sources of sound.

In the recording room, the sound can come from multiple directions and different sources. For example, the sounds may be from:

This is why sound reflection and distortion are usually present in recordings. The pressure points are diverse, so the entire room needs to be treated to control sound effects.

When choosing a room for your home studio, you should:

If you want more details on acoustic treatments, check out this YouTube video:

Importance of a Mixing Room

Unfortunately, the mixing room is sometimes seen as an afterthought, especially in home studios. Some artists invest in some of the best mics and software plugins but overlook the importance of the mixing room or mixing engineer.

Tips on How To Control Sounds In a Mixing Room

The mixing room is likely one of the most critical rooms after the recording studio. The mixer has to be in an environment where you can make alterations to the track. You can take several steps to make this room suitable.

The mixing room will determine how easy or difficult it is to identify issues with the recording. Sometimes, it is a subtle echo. Other times, the problem might be with the sound.

Sound equalization and compression are only possible if you can identify sections in the recording that require changes to improve its quality.

You can improve the listening environment in various ways. One way is to adjust the studio monitors. You can do this by setting a fixed volume to allow your ears to adjust to the sound level. You can easily identify unique sounds when your ears are trained to look out for them.

It is natural for sound to bounce off different surfaces in the mixing room to create a vibration or echo. The best way to isolate the reflection points is to find the most obvious points first. These tend to be the major problem areas. Once you solve them, you will have an easier time improving the recording.

Place Absorbers in the Corners To Control Sound Effects

Mixing rooms do not need the high level of acoustic treatment that recording rooms require. Thick trappings in the corners of the mixing room will help reduce low-end sound response. However, for the absorbers to be effective, they need to cover the entire corner, from the bottom to the top.

By doing this, you are creating a bubble where sound has nowhere to escape. You will then have an easier time identifying sounds and making necessary alterations to the recording without worrying about external influences.

Although the furniture you choose for your mixing room will determine your comfort level and the aesthetic appeal of the mixing room, it can also control sound reflections. In their way, furniture can also act as a barrier to sound bouncing off surfaces. So, you can strategically place your furniture in problem areas as part of the acoustic treatment.

For more information, check out some of my other articles:

Can You Record Music in an Untreated Room?

Many upcoming artists record their music in their bedrooms or garage, and they still release great tracks. Some of these recordings have landed them great deals with professional music producers.

You can record music in an untreated room, but you should opt for a smaller room over a large one. Place a duvet on a T-shaped mic stand between you and the back wall. Avoid working in a tiled room since sounds bounce off easily from one wall to another.

While a treated room makes recording easier, it is still possible to produce music in an untreated room. You only have to take steps to reduce sound and vibration interference. A larger room will introduce echoes to your music, while tiles have a greater surface sound impact.

The Difference Between Professional and Home Recording Studios

Many upcoming artists have found ways to turn their homes into recording studios. Even artists who work with record labels have home studios. There are several differences between home and professional studios:

Why Home Recording Studios Are Popular

Over the past couple of years, home recording studios have become quite popular. Artists even have easy access to information on how to give home studios a perfect acoustic treatment. This has improved the quality of tracks.

There are several reasons behind the large number of artists recording in their home studios: 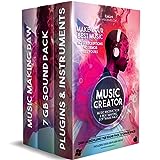 Check out my article about whether you can produce music on a Chromebook.

Listening to a recording only to discover that the audio is clipped, distorted, or overall damaged would be enough to send any editor straight into panic mode, myself included. Luckily, not all...

Continue Reading
link to How To Avoid Clipping When Recording Vocals

Clipping is one of the most frustrating technical issues when recording audio. Avoiding clipping is not easy because there are so many points in the recording process that can cause the problem....