. Almost always, a clean video can be obtained without any green spills if the shoot is done behind a green screen under natural light.

Resolving the green spill problem requires a proper and elaborate understanding of the lighting techniques. You could always consider hiring a VFX supervisor or marker to assist in camera movement to consistently capture adequate lighting. Experts also help avoid green spills by correctly moving and placing the camera in a position that doesn’t disturb the lighting and aggravate the green spill.

Of course, if you’d rather do things yourself, here are a few tips to keep in mind:

An excessive use of backlighting is one of the easier and more effective ways to avoid green screen spill. Check out my suggestions for which video lights to purchase at the end of this article.

2. Lock the Bias Controls Together

In Keylight, one of the best ways to get the desired result is by locking the Bias Controls together. The Controls include Despill Bias and Alpha Bias. There’s an option where you can lock both. Doing this ensures a good color key is achieved.

Let’s say you have an image where the green color is persistent in the background, or some of it has spilled over onto your image. To remove it, simply select a natural skin tone from the image and apply it where you want the green to be removed.

Usually, the Despill Bias and Alpha Bias are linked together. There’s no need to change the Alpha Bias. However, on some occasions, when it’s more about the tone of the background compared to the foreground, this option can be used to fix the issue. But before you can do that, you need to uncheck the ‘Lock Bias Together’ option.

3. Change the Way the Keylight Handles Pixels on Video

Keylight is an excellent tool for video correction and post-production. Apart from Bias Controls, another way to remove green spills is by changing the way you handle pixels.

Keylight has a method that intelligently blends the pixels that are similar to the screen color. This is known as the replace method. Although, it may be a tricky color replacement or a soft color replacement.

You can also stick to the source method, where the original screen color will be what the pixels try to match. It can be added and removed whenever the alpha is altered. You can also switch your view to see which pixels Keylight is modifying.

is crucial because it’s an efficient way to remove the green spill. Here, Keylight modulates the pixel’s luminance to match the original by adding the required amount of color into the image.

This is unlike the hard color replacement method, where the alpha channel is increased to add the required amount of replacement color in the image.

5. Use the Spill Suppressor Effect Within After Effects

The after-effects option is an integral part of every video creator software. In Keylight, Spill Suppressor can suppress a color by a required amount which doesn’t cause any further color issues.

Here’s how to use it:

The Spill Suppressor works on specific parameters, as follows:

6. Use the Curves Effect

If you’ve shot in an overall green foreground, you can use the curves effect in after effects to select a more natural color. It’s available in the color correction menu. This can be done by setting the color drop-down box as green, then changing the curves required to change the color cast.

Adobe premiere pro has been appreciated for its clear and flexible interface with many organizational tools and responsive speed. It’s believed to be a robust tool in green spill removal among other video production apps with multiple camera angles.

Here’s an excellent tutorial on how to master the 3-way color corrector on Premiere Pro:

8. Use Adobe After Effects

Adobe After Effects is yet another great and effective tool to remove green spills. It’s one of the best tools in the market for spill suppressors.

To hide the shadows and remove the green spill, you can use different effects. Type the effect in the channel, and the apply button will include the channel mixer. This means multiple effects can be applied at once.

To remove the color effect, start by selecting a scale of color you want to use. The scale ranges from 1-50. Once you’ve found a good color, use layers to remove objects in the image.

To learn more about removing green spills, check out the following video:

Sometimes, the most complicated issues can be solved with simple adjustments. Green spill on videos is one such issue that can often be solved by adjusting the lighting condition or the room arrangement.

In this case, directly reduce the green screen and floor size by placing a small floor and small screen where the person stands. Less surface area leads to less reflection on the person being photographed.

10. Use the Blender 3D Software

When the image is clicked on, the spills, if any, become noticeable. In the extracted image, you’ll notice the pixels are precisely the same color as the non-extracted image. The ‘Greenspring’ option will try to neutralize the green spill, which is effective in many situations. Keep in mind, the spill settings can be changed at any time.

One of the most significant advantages of the Blender 3D software is it can be used to fix your settings in the real world. In a way, this can be considered a pre-production tool that removes the headache of applying post-production effects.

To learn more about the Blender 3D software, watch this beginner’s tutorial video:

Creating an excessive use of backlighting is one of the more fundamental ways to avoid green screen spill in the first place. Here are some excellent options for video lights (all available on Amazon.com) for you to consider:

These Neewar Dimmable LED video lights are perfect for video. They have an adjustable brightness ranging from 10% to 100%. This means soft and even lighting on video calls and fewer spills from green or blue screens.

The lights are USB powered, but a USB wall charger should be used instead of a laptop or power bank. The other items included in the pack are colored filters, an extendable tripod, extension rods, and a USB cable. 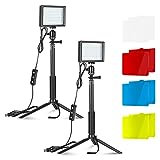 The GVM RGB video light has a simulating option where you can use eight kinds of scene lights. So it doesn’t matter if you’re shooting in strong or weak light, it’ll adjust accordingly.

In addition, there are two different modes. In the first one, the color temperature can be adjusted between 3200K and 5600K, and the second allows for an adjustment of the hue output and color saturation from 0% to 100%.

This light can also be controlled via a mobile app, making it extremely useful in different settings. It has 168 LED Beads and 84 RGB beads and has adopted the American Chip. This means the light is sturdy and has enough power to last a long time. 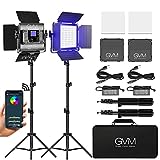 It can also be controlled via a remote control that supports a 2.4G wireless radio remote with a control range of ≥50m. 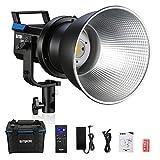 The Fositan FL-3060 is super lightweight, making it perfect for travel filmmakers. The super bright LED provides the equivalent of a 400W incandescent light while only consuming 40W of power, and it’s ideal for outdoor use.

The panel can be used alone or with the flexible light, which bends 360° for complete control of the light’s direction. It also comes with a 25% diffusion panel for additional diffusion. The aluminum frame is attached using clips, and each side has a mount to allow for use on either a tripod or a light stand.

Though one of the more expensive options, this light isn’t lacking in features. You get an LED mat (weighing just 1lb or .45kg), a remote control, a white cloth diffuser, a connecting frame tube, and a power adapter. Not to mention, it’s a great option for photography, as well! 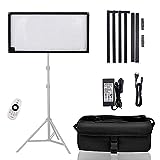