Setting up a basic home recording studio requires you to make a checklist of the essential equipment you need. Next to the microphone, the most important equipment to improve the quality of your sound recording is the pop filter and the windscreen. But do you really need both at the same time?

You don’t need both a pop filter and a windscreen at the same time. A pop filter would be enough for a studio setup, while a windscreen is more useful when recording outdoors. But while they’re different, they generally function to reduce unwanted noise from your recording and protect your mic.

In this article, you’ll learn more about the differences between a windscreen and a pop filter. You’ll also read about when to use each of them, including which one you should buy.

Pop filters and windscreens are standard tools used with microphones to reduce excess pressures like breath blasts, wind current, and vocal plosives. They’re popular in both live and studio settings. However, there are differences between them, too.

A pop filter is a piece of equipment made of light mesh placed over a wire or plastic ring frame and held in front of your mic. It’s a dedicated means of protecting your recording against popping sounds.

“Pops” are caused by the mechanical impact of air moving really fast on the microphone from plosives when you sing or talk. Simply put, pops are the blasts of air you produce when you say words starting with letters like P, T, B, and D.

Pop filters reduce the energy of these plosives, which could otherwise exceed the input capacity of your mic and lead to clipping and audio spikes.

A pop filter intercepts the sound energy of these pops. The strands of its mesh material break up this energy before it can momentarily distort and impinge on your mic’s sensitive diaphragm. Without a pop filter, these sounds would be hard to fix in editing and mixing and could therefore ruin your recording.

Here’s a video of a plosive sound test, which demonstrates the difference between recorded audio that didn’t use a pop filter and one that did:

Moreover, a pop filter has a hygienic function. It’ll protect your microphone element against the accumulation of saliva. Human saliva contains salts that are corrosive and bacteria that could be harmful to your health. So using a pop filter can effectively improve your microphone’s lifespan.

Generally, pop filters are best in a studio environment.

Windscreens are foam “hats” that you put on your microphone. Some, called windjammers, are a combination of foam and faux fur. Others, called baskets of blimps, are large plastic mesh capsules with a layer of foam inside.

Windscreens fit over your mic and shield its grille from catching noise produced by the wind coming from all directions while also allowing audio to pass through. It also brings down the volume of background noises that sensitive microphones could otherwise pick up.

The thicker the material used for windscreens, the better its ability to diffuse wind noises and stabilize air pressure near the mic. However, the more it compromises high-frequency audio, too.

Windscreens work best when recording on location or outdoors where there’s wind. Vocalists also use them when they perform on stage to reduce saliva and plosives. However, they aren’t as acoustically transparent as a pop filter.

Here’s a video demonstrating the difference between using a windscreen and not when recording:

Like pop filters, windscreens also protect your microphone from saliva and bacteria.

Pop Filter and Windscreen: Can One Do the Same Job As the Other?

Some people use windscreens as protection against popping noises, but they don’t really work that well because they’ll also eliminate higher frequency tones. Windscreens aren’t exactly designed to get rid of popping noises without affecting treble. But while windscreens won’t make excellent substitutes for pop filters, they can still reduce the extent to which your recorded voice pops out.

Meanwhile, it’d be difficult and inconvenient to use a pop filter if you’re recording outdoors. So, a windscreen will be a sufficient trade-off. You can try to get rid of the plosives when you’re editing your recording.

Pop Filter or Windscreen: Which One To Buy?

If you’re setting up your own recording studio at home, a pop filter should be the one on your shopping list. You would want to record high-quality sound without the popping noises that are difficult to eliminate later on. Besides, getting a windscreen for your home studio would be pointless since there won’t be wind blowing from any direction unless you have a huge industrial fan blasting air in the room.

Meanwhile, if you anticipate doing most of your recordings, such as podcasts, outdoors where it’ll be windy, then get a windscreen. Using a pop filter outdoors may reduce windy noises, but it’s going to register audible treble loss, not to mention it’s inconvenient to use, too. A pop filter is usually attached to your microphone stand, which isn’t practical to use when you’re outside of a studio.

However, there might also be moments in your life as a musician, podcaster, vlogger, or audiophile when you need a combination of the two. The more experienced you become, the better you’ll be in knowing when you need to eliminate certain noises and how to do it. So you may need to have one of each handy, whether you need a pop filter, a windscreen, or both.

After all, pop filters and windscreens aren’t exactly expensive. They’re actually the most affordable of all recording equipment you need. You can get a pop filter and a windscreen for less than $10 each at Amazon if you buy one like the JEEMAK Microphone Pop Filter.

To put it simply, you don’t have to choose between the two unless you’re on a very tight budget. Get one of each because you never know when you’ll need them. 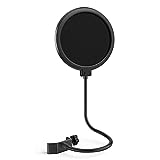 Tips in Buying a Pop Filter and a Windscreen

Pop filters are universal, and they typically fit any microphone. So you only need to choose from among the various ring or frame sizes and the mesh material. There are pop filters as small as the front of your microphone and others as big as your dinner plate. There are also pop filters made of metal, plastic, nylon, or fabric mesh.

However, you have to get one that’ll fit snugly over your microphone when it comes to windscreens. And mics come in different sizes and form factors, so make sure you get the measurements right. Some microphone brands and models also have dedicated windscreens.

That said, it’s always wise to buy your microphone first. Microphones are more expensive, and you’ll need to be more particular when choosing one. Your pop filter and windscreen should fit perfectly with your mic and not the other way around.

For more information, check out my Complete Guide to Building a Home Recording Studio.

However, if your question is whether you should buy both, it’s wise to get one of each.

Pop filters and windscreens are relatively inexpensive, after all. Plus, you never know when you’ll need one more than the other.

Check out whether you need a pop filter for a condenser mic.

Recording audio is essential and sometimes a difficult task. Suppose you have your podcast, streaming channel, or you record videos for Youtube with a Blue Snowball microphone. In that case, you know...

Continue Reading
link to Is Mixing a Song Hard? What You Need To Know

Music isn't easy to make, and there are many steps in creating a complete song. One such step is mixing, which is a process of adjusting and combining the individual tracks you've recorded into a...