Windscreens and pop filters are essential tools for streaming and professional audio production. They block out strong, harsh winds in the surrounding environment and filter out plosives (smaller blasts of wind created when speaking), preventing them from getting to the mic. But which is best for streaming?

This article will look into windscreens and pop filters, how they work, and their benefits. We’ll also get to see how they can help content creators produce good-quality audio for their videos.

What Is a Windscreen?

If you’ve ever watched footage of meteorologists covering heavy storms, you must have seen the big plastic (or foam) material covering the mics. They’re typically used by news crews reporting from a windy environment.

You may have also noticed big faux-fur covers on mics used by the video crew from your favorite documentary while working from a windy mountainside.

What these “covers” have in common is that they work with mics to capture clear, undistorted voices in a windy environment.

A windscreen is an outer cover for microphones made of faux fur or foam. It is used to block fast-moving wind from blowing directly into the mic capsule and causing unwanted noise. Windscreens are primarily used outdoors to capture clear voices and prevent wind noise from the same environment.

For example, you’re recording an interview near the beach. There is a strong wind blowing right past you, but you don’t want that in your video.

So, your camera crew decides to cover each of the mics with a faux-fur windscreen. Now, your viewers can clearly hear what you’re saying despite all the wind blowing past your equipment.

Although we highly recommend

using windscreens outdoors, using them indoors on special occasions can help improve the sound quality. For example, if you’re interviewing indoor sports athletes at half-time, you can use a windscreen to protect the mic from their heavy breathing at a close range. This helps capture the speaker’s voice as accurately as possible without the wind noise from his heavy breathing.

How Does a Windscreen Work?

First of all, there are three kinds of windscreens

; foam windscreens, windjammers, and baskets. Each type of windscreen has its own working mechanism. But they all serve the same purpose.

A windscreen works by breaking the wind blowing around the mic. It then diffuses the air movement in and out of the mic. This allows sound to pass through the windscreen material and into the mic chambers. Windscreens are used to cover shotgun, lavalier, and condenser mics from strong outdoor winds.

Here’s a brief introduction to the three types of windscreens and what they’re made of:

Apart from blocking out unwanted wind noise, windscreens also protect your microphone from the accumulation of moisture. When a person holds the mic at a close range and sings or talks, there is a high chance that moisture will be getting into the mic capsule, where it can do a lot of damage.

Dirt is also an issue that can affect microphones in the long run. The good news is, you can prevent both dust and moisture from getting to the electrical components.

If you’re working in a dusty environment, say, a construction site, cover the microphone with a windscreen to prevent dust and debris from getting inside the mic.

Benefits of Using a Windscreen for Your Mic

Nowadays, it is almost impossible to record outdoors without a windscreen. The unpredictable climate may significantly interfere with your audio. People are more concerned with the audio quality, so it’s always necessary to use a windscreen every time you record audio outdoors.

Here are a few benefits of using a windscreen:

Noise-Free Audio From Your Mic in an Outdoor Environment

Unless you’re in a very noisy environment, a windscreen can actually help tame the wind’s noise from getting into your audio. According to many experts, wind noise appears as a rumbling low-frequency disturbance in the audio spectrum.

If it overlaps with the speaker’s speech frequency, you get bad, unintelligible audio.

Wind noise is very difficult to edit out, even with the best tools on the market. That’s because if the wind blows directly onto the mic, it becomes part of the signal along with other important audio.

A windscreen covers the most important part of the mic; the capsule. It prevents the wind from blowing directly into the capsule.

The overall audio quality is just as good as the equipment used to capture it. So, bad, noisy audio captured in a windy environment will probably not bring out quality sound even after post-processing and professional mixing.

The signal will simply be too contaminated to make any meaningful changes. And in the worst-case scenario, the video crew might have to take another cut – and nail it this time.

A windscreen filters wind noise at the most critical stage while recording. It’s made of a material that blocks out the noise and only allows clean sounds into the mic’s capsule. So, no more audio signal contamination from heavy breathing or harsh outdoor blizzards.

Additionally, the windscreen also diffuses some of the pop sounds to make even better quality audio.

Enhances the Service Life of Your Microphone

A windscreen’s main job is to diffuse air movement around the microphone and only allow sound to get in.

However, foam windscreens also act as an extra coat that protects your mic from dust, small objects, moisture, and spit. Doing this prevents damage to the delicate mic capsule and adds more years to your mic.

What Is a Pop Filter?

or pop screens) have found their use in indoor recording and streaming. In addition, they’re used by vocalists in professional studios, as well as by YouTube bloggers and podcasters. So, what exactly is a pop filter?

A pop filter is a circular device fitted with a thin foam material that acts as a barrier to popping plosive sounds. It protects the microphone from the short, intense bursts of winds that come out in various sounds, including b, p, t, k, g, and many others.

Studio experts normally place the pop filter a few inches from the mic. Shielding the mic against the plosive sounds reduces the risk of pop noises contaminating the signal. It also prevents spit from getting through to your mic.

Note: You don’t necessarily need a pop filter. You can reposition your mic and place it below your chin, where the plosive sounds won’t make direct contact with the mic condenser.

However, we do recommend adding a pop filter to your equipment. It gets you a step closer to better quality audio.

How Does a Pop Filter Work?

Pop filters can improve sound quality in your recordings by reducing wind noise. There are several kinds of pop filters ranging from foam to metal fabric. However, they all work the same way.

A pop filter works by dispersing the intense bursts of air in speech. So, when you sing or speak, plosives come off as little bursts of air. When these reach your mic, they distort the signal quality. Your pop filter acts as the barrier that blocks these bursts but also allows sound to pass through.

Quite some amount of energy goes into producing plosive sounds when singing or talking. Placing the filter a few inches from the mic ensures an even distribution of all the sounds getting to your mic. It also prevents sharp, noisy spikes in your audio signal.

Pop filters are large enough to cover one side of the mic. Typically, you wouldn’t need them if the mic was to be placed at a further distance. However, since you’ll have your mic placed

2-5 inches from you, a pop filter comes in handy to prevent pop noise from getting picked up in the recording.

Benefits of Using a Pop Filter for Your Mic

Pop filters are an undeniable necessity for quality audio. Not only do they block out distortion from pop sounds, but they also prevent tiny debris and spit from reaching the mic’s most essential parts. Here are a few benefits of pop filters:

Pop filters are mostly used indoors. For outdoor applications, you might want to consider getting a windscreen.

Pop screens feature a porous material that allows sound to pass through but blocks out distortion and sudden spikes from pop sounds.

Protect Your Mic From Damage

Putting a mic so close to your mouth while speaking or singing increases the risk of damage from spit and the occasional bursts of air. You want to keep these to a minimum.

Instead, a pop filter should be positioned right in front of the mic where it can disperse most of these little nuances.

Should You Get a Windscreen or Pop Filter for Streaming

For the longest time now, professional video and sound crews have mistakenly interchanged these two devices. Now you know the differences, you can make a more informed decision.

Either way, if you’re constantly streaming video and audio content, it must be accompanied by high-quality sound. So whether you’re a Youtuber, a gamer, or a vocalist, pop filters and windscreens are devices you will need at least once in your career.

Most content creators prefer streaming indoors because, first, that’s where most of the recording gear is. If you’re podcasting, you’re likely doing it indoors, and if you’re interviewing, you’re also probably doing it indoors. In this case, a pop filter should be enough to filter out unwanted noise

However, on the rare occasion that you’re streaming outside, a windscreen is the better choice.

Remember, you don’t need to use both at the same time; one is enough depending on the environment you are streaming in. Also, check on the type of mic you’re using. Some high-end mics come with inbuilt pop filters, saving you the upfront cost of buying the device.

from Amazon.com is very affordable and comes with a built-in pop filter and headphone amplifier. 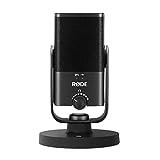 Sound quality makes up more than half the quality of the entire video content. Viewers can watch a lower-quality video with excellent sound, but most of them won’t make it through a high-resolution video with terrible audio.

While windscreens and pop screens filter unwanted noise, you want to ensure that you use the right device for the right environment.