To record drums and guitar at the same time, make sure you’re recording in a big enough space to accommodate both instruments. Record the song using dynamic cardioid microphones. Then, fine-tune the recording in the mixing stage so that the drums don’t drown out the guitar.

This article will walk you through the best way to record drums and guitar at the same time.

Why Is Recording Drums & Guitar Simultaneously So Tricky?

If you’re at the beginning of your recording career and find yourself incredibly frustrated each time you listen to your home studio recording, know you’re not the only person struggling with this. Why is recording these two vital instruments in popular music so hard?

If you’re using the wrong microphones, only one microphone, or cheap microphones, your drums are going to drown out your guitar every time. When recording drums and guitars, you need to use high-quality cardioid microphones, not condenser mics.

There’s no way around the need for high-quality cardioid microphones. This article will explore some good recording mic options below.

Very loud! There’s a reason parents dread the day their teenager asks for a drum kit. Playing the drums makes a lot of noise, and unless you have something like mesh drum tips or drum mutes, there’s just no way around that.

In any case, you can’t use drum mutes when making a recording. The noise from the drums tends to drown out the noise from all the other instruments.

Recording Space Is Too Small

While quality recording equipment is critical, some musicians miss the most vital aspect of making a quality sound recording: having a space big enough to accommodate all the instruments you need to record. The closer together all the musicians are playing, the muddier your mix will be.

If your recording space is slightly smaller than ideal, you might be able to counteract it with microphone placement and fabric dividers. If it’s a very tiny space, you will find it difficult to capture drums & guitar parts clearly.

Some of the most popular kinds are Logic Pro X’s Amp Designer and BIAS Amp.

The amp simulators cut out the possibility of interference between the guitar and drums, creating a clean guitar part. Your guitarist will be able to keep time to the drums, but keep in mind that your drummer won’t be able to hear your guitarist.

However, an amp simulator is only a viable option for recording. Some bands prefer to keep their recording as close to “live” as possible, meaning an amp simulator won’t work for them. It all depends on what you want the record to sound like.

Still, you won’t want it to sound so muffled you can’t make out the music. If you still want to record the drums and guitar in the same space at the same time, read on to determine the best way to do it!

One of the most critical elements of making any sound recording is quality recording equipment. Although you might not want the most expensive microphones, you’ll want to invest in them.

Not all cardioid mics are created equal, however, so you’ll want to make sure you invest in ones that are widely trusted.

You’ll want to work with a minimum of four cardioid microphones on your drumset, with one that goes next to the kick drum. 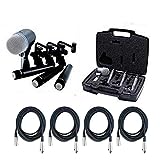 Just like with recording microphones for drum sets, you’ll want to get a cardioid mic to capture your guitar playing. 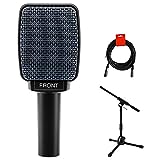 For more information, check out how many mics you need to record drums.

Set Up in Your Recording Space

As noted above, if you have a home recording setup, you’ll want to have a big enough space to accommodate both instruments. If you’re recording in someone’s bedroom, there probably isn’t going to be enough space to make a decent simultaneous track.

If you find yourself stuck in a small recording space, however, you can do several things to improve the quality of the recordings.

Put your drum kit and your electric guitarist in completely separate rooms of your house. This might seem counterintuitive, but you want your drums as far away from other instruments as possible. Besides, they’re so loud that the other musicians should hear them no problem.

If you’re extra industrious (and don’t have extra room to put your drums in), you can set up an artificial wall between your drummer and the rest of your instrumentalists. You can do this with fabric like towels hung on a clothesline or even clothes closets. A little separation goes a long way!

Now that you’re all set up, it’s time to record the track! Keep in mind that the most critical element of a quality recording is the skill of the musicians. Seasoned drummers and guitarists will usually know the best way to capture their instrument’s sound.

It’s also helpful to get a talented sound mixer involved. Sound mixers will be able to do things like cut out certain frequencies to help clarify different instruments, cutting some of the muddiness from the song.

Check out my article about whether drums should be set up on carpet.

Recording drums and guitar simultaneously can be frustrating if you don’t know what you’re doing. Even groups with recording experience often find themselves with recordings ruined by booming drums and muddy guitar tracks. As long as you get a decent set of microphones and set up your space so that the two instruments don’t interfere with each other, you should be okay.

With these tips, you can streamline your recording process to make great-sounding musical tracks consistently.