Cardioids focus on sounds directly in front of the mic, so sounds from the sides or rear will be muffled. If you need to pick up sounds equally from all around the mic, omnidirectional mics are a better choice for your studio.

As you can appreciate, each of these mics has different characteristics. Knowing the differences will enable you to make an informed choice and achieve the best result in your studio recording. So, listen up, and you can find out below whether omnidirectional or cardioid mics are best in the studio.

Omnidirectional and Cardioid: What Are They?

First, let’s explain what we’re talking about. Omnidirectional and cardioid refer to one aspect of a mic’s specification, known as its polar or pick up pattern.

Essentially, the terms describe the mic’s ability to pick up sound coming from different directions relative to the front of the mic.

You’ll most often see polar patterns drawn by reference to a circle representing a 360° sound field. At 0°, or on-axis, is the front of the mic and 180° is the rear. All angles other than 0° are known as off-axis. Circles within the circle indicate decreasing levels of sound sensitivity.

Bear in mind, as explained in the following video, the pattern is three-dimensional, so the sound field is more spherical than circular:

But let’s use the typical circular view because it makes it easy to see the sensitivity differences between omnidirectional and cardioid mics.

Check out my guide to the Best Boom Arms.

Hopefully, the following diagrams will help you visualize how omnidirectional and cardioid polar patterns compare:

As you can see, in theory, the omnidirectional polar pattern gives the same sensitivity around the full 360° of the circle.

That means whether you stand in front, behind, or to the sides of the mic, the sound it picks up will mostly be the same.

In contrast, a cardioid mic, a type of unidirectional mic, is most sensitive to sounds more-or-less in front of it. That’s at 0° on the circle.

As the diagram shows, it will pick up some sound from its sides. But there’ll be a sensitivity drop-off as you move closer to the 270° or 90° positions. It’ll reject most of the sound from its rear.

The cardioid pattern looks like the back end of a plump hippo. But as its name suggests, heart-shaped is its official description.

The following video contains an easy-to-understand explanation of the different polar patterns, and it deals with omnidirectional and cardioid patterns from the 3.04 mark:

So, let’s look at what these polar patterns mean in practice.

An omnidirectional mic is ideal if you’re recording a group of people or instruments. You can assemble the group around one mic because it’ll capture what everyone is singing or playing equally. And you probably won’t be able to tell where a performer is relative to the front of the mic.

So, there’d be no need to move the sound source to the front of the mic or vice versa.

Also, unless you’re recording in an anechoic chamber that absorbs sound, you’ll probably have some degree of sound reflection in your studio. How much depends on what acoustic treatment you have. An advantage of cardioid mics is that they minimize unwanted reflections.

However, limited reflections from excellent room acoustics or a vocal booth can enhance a recording, giving a more natural sound. That’s a good reason to use an omnidirectional instead of a cardioid mic in this situation.

Many omnidirectional mics are designed for handheld use or for attaching to your lapel. But this Audio-Technica Condenser Microphone (AT8010) is one that comes with a stand, making it ideal for studio recording. 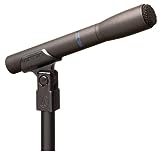 A cardioid mic is an obvious choice if you want to focus on a specific sound. They’re also particularly useful for keeping each sound as a separate recording to mix later.

Cardioids are ideal for studio use because they’re less sensitive than omnidirectional mics to sound reflections from the room.

But if your studio is highly reflective, even a cardioid mic can pick up those reflections from its sides and rear. You might find the coloration in the sound from those off-axis directions can make your recording sound muddied.

So, you may still need to use some acoustic treatments with a cardioid if that coloration adversely affects the sound you want to achieve.

You’ll also notice when using a cardioid mic, as the sound source moves closer to it, there’ll be an increase in the bass. This is the proximity effect. Omnidirectional mics aren’t affected by it.

The proximity effect can be a valuable tool if you want to add depth to a sound, perhaps to give weight or warmth to a voice. So, don’t assume it’s a bad thing.

But if the bass boost isn’t desirable for your recording, don’t automatically reach for an omnidirectional mic. Try placing the sound source slightly further away from your cardioid mic.  Experiment with different distances to find which sounds best.

Another issue with cardioid mics is the vocal plosive. But you can overcome this with proper positioning and a pop shield.

Despite these apparent drawbacks, cardioid mics are often the mic of choice in studios. This TechZone Diaphragm Cardioid Condenser XLR Microphone is a highly rated yet affordable example of what you might find. 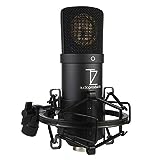 You’ll see from this video review that it came out favorably against a more expensive Neumann U87 AI Large-Diaphragm Condenser Microphone:

Is Omnidirectional or Cardioid Best in the Studio?

As you’d expect, the answer to this question depends on your particular mic, what it is you’re recording, and your studio acoustics. Perhaps the real question is which mic type is best in specific situations.

So, let’s summarize when it might be best to use an omnidirectional mic and when the better option may be a cardioid mic:

However, take the above as a general guide, and don’t be afraid to experiment with each mic even if it wouldn’t be your instinctive choice.

As you’ve seen, cardioid and omnidirectional mics have different characteristics that you can harness in your studio.

So, which is best in the studio, omnidirectional or cardioid? Well, as with any creative process, the only rule is there are no rules. Good and bad in terms of sound is highly subjective.

What works in one studio may not work so well in another. Equally, what works for one voice or instrument may not work for another.

The soundest approach is to try both mic types in whatever situation you’re dealing with and go with whichever hits the right note.

Check out my picklist for the Best Condenser Microphones Under $200.