Blue Snowball is a fantastic microphone that records crystal-clear audio. But no microphone sounds excellent if all you get from it is static noise. Fortunately, we know why static noise happens on your Blue Snowball, so it’s time to fix it once and for all.

This article will go over the most common causes for static noise on your Blue Snowball. I’ll also explain how you can fix your mic so there won’t be any buzzing.

The Blue Snowball Is Plugged Into a USB 3.0 Port

Since USB 3.0 is backward compatible with older standards, you’d assume that it’ll work without any problems.

If you have a newer computer or PC case, you probably have several USB 3.0 ports. So, it’s easy to make the mistake of plugging the Blue Snowball into it.

The easiest solution is to just use a USB 1.0 or 2.0 port instead of 3.0 (or newer). You can usually tell the difference by looking at the plastic tab inside the port.

USB 3.0 and 3.1 are blue, whereas older generations have black plastic.

If all ports look indistinguishable on your computer, refer to the motherboard manual.

An alternative is to use a USB 2.0 hub. It’s not a perfect solution, which I’ll explain later, but it’s worth a shot if you don’t have USB 2.0 on your computer.

For more information, check out how to reduce background noise on a Blue Snowball mic.

Blue Snowball Is Plugged Into a Front USB Port or Hub

If you plug your Blue Snowball into a USB hub, it can cause a lot of problems.

USB hubs are only good for storage devices. That’s because a USB hub can cause power and bandwidth issues.

You might think that the USB ports on the front of your PC case are better, but they aren’t. In a nutshell, they’re just fancier USB hubs.

They also connect to your motherboard via an internal cable.

It’s best to skip all intermediary connectors and plug the Blue Snowball directly into the motherboard.

You can do that by taking the USB cable and plugging it into the back of the computer. That’s where the motherboard USB ports are.

Important Note: Ensure that the USB cable is all the way in on both sides. If the cable is only partially plugged into the mic or computer, it can cause static noise.

There Is an Issue With the Blue Snowball Microphone Mode

The modes can be changed by adjusting the slider on the back of the microphone. 1 is for cardioid, 2 is for cardioid with -10 dB pad, and 3 is for omnidirectional.

If the microphone is for voice calls, you should use cardioid or cardioid with -10 dB pad.

The omnidirectional mode picks up too much noise surrounding the mic and can result in static noise.

If your mic is in cardioid now, try to use the -10 dB mode instead. If the static noise goes away, then the cause was most likely ambient noise.

If the noise only goes away in omnidirectional mode, there’s an issue with the electronics inside the microphone. You should return the microphone in that case.

For more information, check out how to make a Blue Snowball louder.

USB cables are thin, so they’re prone to interference.

If the cable from your Blue Snowball is near a power cord, like the one going into your monitor or power supply, it can pick up static noise.

Since you’re using the USB cable for audio, it’s extremely sensitive to static.

The easiest fix is to move your USB cable as far away from the power cables as possible.

If that doesn’t help, you should try a higher-quality USB cable with better shielding.

Shielding on cables creates a Faraday cage that protects the signal from electrical noise and EM radiation.

Alternatively, get a USB cable with ferrite beads. The chokes protect the cable from electronic noise.

The Tripp Lite USB 2.0 Cable with Ferrite Chokes from Amazon.com is exactly what you need. It’s USB 2.0, so it’ll be compatible with the Snowball. Plus, the cable is shielded with tinned copper for even better noise reduction. 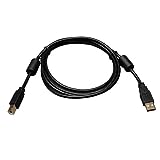 The Blue Snowball Picks Up Vibrations From Computer Fans

The fans create a buzzing or humming noise that sounds a lot like static crackling on your Blue Snowball.

The noise isn’t necessarily transferred by air, though. The table can carry the noise to your mic too.

Try holding the Snowball in your hand and using it. If the noise goes away, then you know what caused it.

The easiest solution is to use a microphone arm stand. Not only will it protect the mic from fan noise, but it’ll also be more comfortable to use.

The InnoGear Adjustable Mic Stand from Amazon.com is a perfect choice for your Blue Snowball. It also comes with a pop filter and windscreen for additional noise reduction. 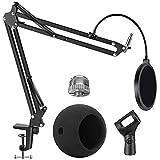 If you don’t want a mic stand, fold a dishcloth or towel and put it below the mic.

It’s not pretty, but it’ll absorb all the vibrations from the desk.

Check out my guide to stopping a Blue Snowball from picking up the keyboard.

The Blue Snowball is a plug-n-play device.

In other words, the drivers are located on the microphone and installed automatically when you plug it in.

But this type of driver installation is far from perfect as the files can get corrupted.

Moreover, if you were using a USB hub or 3.0 port previously, the drivers won’t install correctly in most scenarios.

The fix for this is very easy. You’ll remove the mic and plug it back in to force the drivers to install again.

Here’s how to do it:

The drivers will install automatically after a minute or two. You can then try the mic to see if it works.

It has a diaphragm that picks up sound waves as you speak and transforms them into an electric signal.

If the capsule doesn’t work as expected, it’ll cause static noise or popping.

Unfortunately, sourcing a replacement capsule and replacing the old one is difficult, time-consuming, and often expensive.

The only realistic solution is to contact Blue’s support to see if you can get a replacement microphone or have them fix it.

Microphones often pick up a lot of static noise, and the Blue Snowball is no exception. In most cases, the USB cable, port, or hub is the cause.

Switching to a compatible USB 2.0 port on the back of your PC is the easiest way to fix static. In some cases, you might need a replacement cable with better shielding to block static noise.

For more information, check out which is better: Blue Snowball vs. Razer Seiren Mini.

link to Are Logic Pro X Plug-Ins Any Good?

Blue Snowball is one of the most popular stand-alone microphones available on the market. Still, those who decide to get one of these sought-after mics might run into occasional issues that raise the...