When using compression on distorted guitars, use a high ratio, a low threshold, and a fast attack and release. You want to be able to emphasize the transients. Compression can be very useful when mixing distorted guitars if you know what you’re doing!

This article will cover some of the basics of what compression is and walk you through how you use compression on a distorted guitar part. We also have some great recommendations for which equipment to use. A compression is a great tool in sound mixing, so don’t be afraid to use it!

Compression is an advanced setting in sound mixing programs that controls the volume on any track. For example, if your lead singer sings way too loudly during the emotional third verse and drowns out the piano, putting a compressor on the track will prevent her from overpowering.

To understand how to work with compression, you need to know how a compressor uses tools like ratios, thresholds, attack, and release. Here’s a brief rundown of some of the basic tools and terms surrounding compression:

Downward compressors reduce volume when it goes over a certain threshold. It only affects loud sounds, leaving soft sounds alone.

Upward compressors will increase the loudness of a sound when it falls below a certain threshold. Loud noises won’t be affected, but soft noises will be amplified so listeners can hear them better.

Both of these things will decrease the range of the sound, so be cautious when applying upward and downward compressors!

The threshold is the volume point that will “set off” the compressor. If a track reaches a certain volume level, measured in decibels (dB), the compressor will be set off.

Attack is the amount of time it takes for compression to kick in and reach its set amount. When sound goes past its threshold, it will lower the track’s volume within a certain time frame.

A fast attack speed is typically under one millisecond, so as soon as the threshold is reached, the compressor will kick in almost instantly. Slow attacks, on the other hand, will take somewhere between 15 and 100 milliseconds and preserve the initial loud sounds.

The release refers to the time it takes for the compression to “back off” and return the signal to its uncompressed state.

Transients are the first moments of a sound in the waveform. They have extremely high energies and help the listener articulate exactly what is being heard. They’re going to be much louder than the rest of your sounds and will have a lot of impact.

Transients can be in danger of being “crushed” by compressors since they can go much louder than the threshold and set off the compressor. Pay special attention to whether your transients are coming through.

How To Record Distorted Guitars

To record a distorted guitar sound that you can compress, you’ll first need to find the right distortion effect. While compression can enhance distorted guitars, it can’t distort them all on its own.

Some amplifiers have a distortion button built-in, but you might prefer to use an effects pedal with distortion. Some of the best ones include:

The EXP-001 is built with a damping mechanism to stay at the right angle for long periods of time. It has a rubber pedal and a durable aluminum housing, so it is sturdy and can survive a few accidental kicks.

The DS-1 comes with a power adapter, a guitar cable, a polishing cloth, a set of guitar picks, and a 5-year warranty. It will give you that classic distorted sound and also has Level and Tone controls.

The JOYO offers a distinctly British classic rock vibe. It has a true bypass, minimizing the tone loss, and can give you a powerful distorted sound for under $40 on Amazon. With Gain, Volume, and Tone knobs, the JOYO will give you precise control over just how “crunchy” you sound. 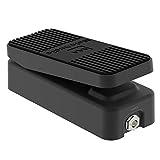 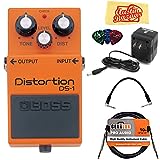 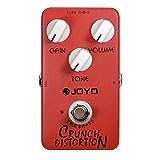 How To Use Compression To Create Distorted Guitars

After reading all this, it might seem counterintuitive to use compression on distorted guitars, but there are some cases when compression may make your distortion sound even better. Indeed, you aren’t going for a “clean” sound, but you don’t necessarily want the sound to be harsh or painful to hear.

To make the most out of compression on your distorted guitar parts, you’ll want to use fast attack and release effects and set high ratios with low thresholds. You’ll also want to make sure the transients shine through, which can be tricky.

Here’s how to effectively use compression on your distorted guitars:

Use a Fast Attack & Release

Your bass frequencies will distort themselves by using a fast attack, offering a unique booming sound to your mix. This can be an undesirable effect if you’re going for a clean sound, but if you want to distort the guitar effect, having the compression kick in quickly will add distortion.

Speeding up the attack and release will keep the frequencies you want to emphasize front and center and prevent transients from overpowering the sound.

With a high ratio, sounds at all frequencies are much more distinct and harsh. Using a high ratio produces a wider dynamic range, allowing the transients to shine through even when you’re using a quick attack. Additionally, using a fast release speed on a high ratio will make a song seem much more aggressive.

Using a relatively low threshold at just under your track’s average output level can help emphasize the attack. That means that the compressor will be kicking in often, allowing your song to stay within the dynamic range you want.

To use compression on a distorted guitar part, set up a fast attack, a fast release, a high ratio, and a low threshold. Make sure your transients are making an impact also. With a careful ear and a bit of experimentation, you can get that perfect sound from even the most distorted guitars.

Don’t be afraid of using compression on your distortion. You might be nervous it will squash your sound, but it simply gives you greater volume control. Compression prevents you from having to minimize each overly-loud sound and will save you a lot of work.