Distortion is a catch-all term for audio effects that add harmonics not present in the original source. These harmonics are usually coordinated or uncoordinated, making them stand out to the listener. Some distortions are more subtle than others, but they all serve the same purpose: to add life and character to an audio signal or blast your perception of audio quality into oblivion.

Distortion changes the shape of a sound wave, usually from smooth, sinusoidal waves (like those produced by a sine wave generator or other perfect, artificial signal) to more jagged, asymmetrical waves. The result is an audio signal that is qualitatively different from the original.

This article explores what distortion actually does to a sound wave, how it can ruin your listening experience, and how to use distortion creatively rather than treat it as something to avoid at all costs.

How Does Distortion Work?

Before we get into the nitty-gritty of what distortion actually does to a sound wave, you need to know how it works. From a technical perspective, distortion can be classified as a collection of effects that add harmonics (also called overtones or high frequencies) to the original signal.

Distortion works by introducing these additional frequencies to make an audio signal sound more aggressive and edgy, which can ruin your listening experience or be useful for specific genres such as metal and punk.

Consider the basic components of audio. A microphone captures musical notes in a digital recording as numbers that indicate how hard the singer or instrument is blowing into the mic. When these numbers are played back through speakers or headphones, they are converted back into sound waves with specific frequencies.

Distortion alters the properties of the resulting audio signal. It can be used to add ‘color’ and character to sounds or as a deliberately destructive effect to create screaming lead guitar sounds.

Distortion is an effect that can be found in almost any signal processing chain. From subtle harmonic coloring to face-melting response, distortion has been used for various effects and remains popular even today. There are several forms of distortion as follows:

Harmonic distortion is a type of audio distortion primarily concerned with the frequencies present in an audio signal. When you push a sound wave beyond its capacity to oscillate at the frequency you have been asking it to, some of the overtones that are not supposed to be there will appear.

An overdrive occurs when an instrument is forced to play at a volume it can’t keep up with. For instance, if you push an amplifier beyond its capacity, the high energy demand will not suffice to keep the speaker sounds running in perfect condition for long. Instead, the amplifier will struggle, and this will manifest itself in distorted sounds from the speakers.

Clipping is probably the worst form of distortion. However, this doesn’t mean you can’t use it for the greater good. It is your system’s edgy, harsh, and grungy sound when your speakers receive a loud signal they can’t normally play. Sometimes, you may notice irritating scratches and clicks from your sound system.

Saturation is a type of distortion produced when an audio system’s electrical components are pushed past their limits. As a result, the signal fluctuates so much between the input and the output.

Other forms of saturation include tape saturation, sample rate reduction & bit crushing. If you intend to use any of these forms of distortion to make your music sound better, a little bit of trial and error is inevitable.

How Does Distortion Affect Frequency?

Frequency refers to the number of cycles per second of a signal, often referred to as its pitch or note. The human hearing range is usually quoted as spanning from 20 Hz to 20 kHz, but these figures are only useful for comparing sounds and signals from one person or device to another. In practice, it’s not so straightforward.

In general, frequency is proportional to how many times a given audio signal increases or decreases in amplitude per second. With distortion, this frequency takes a slightly different form. So, how does distortion affect frequency?

Distortion affects frequency by changing the signal. This means that the frequencies of a distorted signal are not only changed, but some parts of the waveform are also removed, and others are exaggerated.

One of the things that make music so universally loved is its ability to bring about a range of emotions in listeners. Whether through fast-paced and energetic tunes or slower melodies with meaningful lyrics, music can evoke a variety of responses in humans with the right effects.

Distortion is a frequently used effect in the production of music. It can be used to add character or create a specific atmosphere and mood. That’s why it’s so widely used in heavy metal subgenres like:

Deliberate distortion is a technique used to add flavor to an audio signal. It adds new frequencies and harmonics to the original audio, usually resulting in a more intense sound.

Distortion back in the day was a nuisance, but that is not the case anymore. As much as it has its set of negative effects, you can leverage its positives to generate better results in your mix. The alterations in sound waves differ in audio, digital, and analog settings.

Controlled distortion can be used to improve the quality of a sound signal. But remember, taking advantage of the upper harmonics that result from distortion is determined by how and what you are using. Here are a few creative uses of distortion in music:

Drum distortion is an audio effect that manipulates the raw and natural sound of drums to give them a slightly unnatural effect. Distorted drum tracks are heavily favored among many music genres and are especially popular in rock and alternative genres. When mixing your own drums, applying some distortion to give them an aggressive edge can bring out the natural intensity of your performance while simultaneously adding depth and attitude.

It’s best to use drum distortion sparingly to get the right balance with other elements within your track or performance. You don’t want to overdo it since the output will sound more unnatural.

Vocal distortion alters voice tone, pitch, and quality through manual or electronic means. This can be done intentionally for effect or unintentionally as the result of the poor recording equipment or bad singing. Singers and various performers commonly use vocal distortion to create a unique sound that sets them apart from others.

Bass distortion is an audio effect that clips the bass response of a track or an entire mix. It’s commonly used for EDM and rap, but it’s not exclusive to those genres. You can also use it in more subtle ways to help emphasize a bass line and add some attitude to your track.

Improving the bass frequencies in your recording can be tricky because there are so many layers of frequency-related information. Light to moderate distortion works great with bass, thanks to its low-frequency content.

Synthesizers and other electronic instruments can produce amazing sounds, but they have their limitations. To achieve the distortion and growling sounds of your electric guitar, you will need to use an external distortion effect, for instance, with a plugin like iZotope Trash.

Distortion by synths and instruments works similarly to distortion in vocals. If you aim to bring out harmonics at the highs and mids, try not to overdo it.

As you can see, distortion on particular elements helps improve sound based on its ability to add and bring out high frequencies in sound signals. Your output from the distortion plugins is categorized into two parameters: the drive and the type of distortion you want to achieve. The drive parameter determines how hard you can distort a signal, while the distortion type is responsible for the overall output.

How To Remove Negative Effects of Distortion

Distortion is a great thing if you know how to use it. Its raw, gritty sound adds character to almost any track. Distortion makes almost everything better, from the bluesy crunch of overdriven guitars and vocals to the metallic growl of death metal.

Conversely, distortion is almost always undesirable when listening to the recorded audio. It can make voices sound strange, give an unpleasant edge to solo instruments like guitar or piano, and generally detract from the listening experience. So, let’s talk about the ways in which you can reduce the negative effects of distortion when recording or playing back audio.

Every time you hit record, you might be inadvertently causing distortion. This may result from a faulty preamp, a bad cable, or other issues with your recording chain. Suppose you’re recording audio for professional use.

In that case, it’s important to know the whole chain of your gear, including the type of microphone you’re using, the type of cables you have, the preamp you’re plugging your microphone into, and the make and model of your audio interface. It’s also crucial to keep your audio chain clean.

Regularly clean your gear, especially if you’re performing live shows or recording in less-than-ideal conditions. If you’re recording vocals, don’t use a cheap pop filter. This can reduce the quality of your audio significantly. If you’re using a condenser microphone, be sure to use the correct type of microphone cable.

Cables are an often-overlooked source of distortion in audio. Many cheap cables introduce distortion that can ruin the sound of your music. If you’re plugging a microphone into an audio interface, use a high-quality cable such as a premium Seismic Audio Patch Cables (available on Amazon.com). Each cable is 3 feet (91.44 cm) in length and comes in a pack of 6 multicolor cables. Another alternative is the high-quality Neutrik cable. 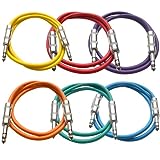 If you’re plugging a guitar into an audio interface, use a high-quality instrument cable. Avoid extremely long cable runs as these can also introduce distortion.

Record in a Flat EQ State

This should allow you to add EQ without distorting your original audio and avoid distorting the original track while applying as much EQ as necessary.

While there’s not much you can do to change this; you can limit the amount of gain on your microphone or avoid plugging high-gain microphones into an audio interface altogether.

If you’re recording in a flat EQ state, that’s great! However, you may find that post-production audio sometimes needs a little bit of clean-up when it comes to using EQ. Using a compressor or limiter on your tracks is a good way to clean up your post-production audio.

However, be careful with these effects and use them sparingly. You can introduce distortion if you hit the red too hard with compression or limiting. In many cases, you’re better off reducing the gain on your audio interface than hitting the red with a compressor or limiter.

Distortion has held a bad reputation for a long time now. But, on the bright side, modest distortion can be useful in small doses and can help to create a feeling or emotion in a track. Heavy distortion has its place too, but if used excessively, it will sound awful.

link to What Mac Should You Buy For Logic Pro X?

Continue Reading
link to Why Is FL Studio So Laggy? 7 Causes and Fixes

Let's face it: FL Studio is not the most optimized software in the world. Although it's by no means a resource hog, it can get awkward when working with high track counts and complex projects that...