Making music is a fun process, and if you’re new at it, you’ll need software (and a computer or laptop!) to help you record your art. Also, you’ll need a microphone good enough for the recording if you’re adding vocals to your music. Suppose you notice your vocals are louder than the beat; is that okay or something you should fix?

Your vocals shouldn’t be louder than the beat in most cases. However, some genres, like pop music, sometimes have vocals slightly louder than the beat to emphasize the beat. Since vocals are the most important aspect of many genres, it’s best to maintain a balance between vocals and the beat.

Keep reading as I discuss the balance between vocals and the beat. I’ll also discuss how loud vocals should be when recorded and the different types of music genre vocal volumes.

Keep Your Vocals and the Beat Balanced

Mixing music is an intricate process and requires a lot of patience and training to produce a high-quality result.

Human voices have different ranges, and the microphone needs to be set for the specific artist’s range. Male artists usually have louder and deeper voices than female artists, whose voices are typically softer and higher pitched.

It’s essential to get a clean sound with as little background noise as possible when mixing music. Vocals are the most important aspect of most genres of music; they must be clear.

There should be an equal balance between the vocals and beat of the music. The vocals can be slightly louder than the beat if the genre requires it but needs to fit into the music. It should never sound like the vocals were added over the music.

There should always be a good harmony between vocals and the beat.

You can watch this informative YouTube video on how loud vocals should be:

Music is such a diverse field of entertainment, and there are so many artists and producers that there are no exact settings to follow when recording a track. The following discusses the different vocal volumes acceptable for different genres.

Pop Music Requires Vocals To Be Louder Than the Beat

The vocals should be recorded slightly louder than the beat to emphasize the lyrics when it comes to pop music. In pop music, the words must be clear. The artist should use a condenser microphone like this Stellar X3 Condenser Microphone (available on Amazon.com) that provides a smooth mid-range response. It also comes with a good shock mount. 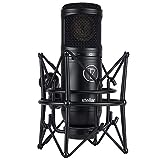 Pop music has a large following and needs to follow a certain standard to stay relevant and keep the listeners entertained and singing along.

Rock music is loud and aggressive. It creates a particular atmosphere, and you might feel like picking up a guitar and playing a few riffs after listening to it. You might also get in a good cardio workout from all the jumping, but a lot of hard work goes into achieving the sound.

The vocals range from being slightly louder than the beat to being at the same volume as the beat. Rock music focuses significantly on the music, and guitar and drum solos must stand out at times. Sometimes, when it comes to rock, you can hear the vocals, but the words aren’t clear; the track sounds more aggressive like that.

When it comes to EDM (Electronic Dance Music), the vocals and beat volume should be consistent with each other.

EDM focuses mainly on the music, and you might find some tracks that don’t have any vocals at all. This music type has heavy bass, which you can feel vibrate through your body if played loud enough. EDM will almost always have a bass drop towards the end of the track and has a high bpm.

Rap and Hip Hop Vocal Volumes Can Change Throughout the Track

Rap and Hip Hop are extremely popular genres and need to be mixed perfectly to sound good.

Rap vocal volumes can change throughout the track; at some parts of the track, the vocal volume and the beat can be even, but the vocals will be louder or softer than the beat at other parts.

Getting the mix right when it comes to rap and hip hop can be challenging and require some practice. The threshold is usually set between -15 dB and -20 dB.

Heavy Metal Vocals Can Be Consistent or Higher at Certain Parts

Heavy metal is an aggressive genre of music, and a compressor like this Xotic SP Compressor (available on Amazon.com) offers a wide selection of compressor tones of superb quality. The vocal volume will be consistent with the beat at some parts of the track and slightly higher at other parts.

When mixing a heavy metal track, you should keep as much clarity as possible by not using too many delays and reverb effects.

How Loud Should Vocals Be When Recorded?

Vocals need to be recorded at the right decibel level. If the vocals are too soft, they might get lost within the music, whereas they will stand out and sound out of place if they are too loud.

Vocals should be -18 dB when recorded at the standard 24-bit resolution; louder parts of the track can be recorded at around -10 dB. The vocals and the beat need to be evenly balanced.

When recording vocals, you should not remove too many of the higher frequencies. And you should use saturation to add warmth to the vocals.

There is no precise formula for recording the perfect vocal track. Some genres require the vocals to be slightly louder than the beat, while others need the volume to be evenly balanced with the beat for the track to sound good.

When mixing a track, you need to take the vocal range of the musician and the genre of music into consideration and remember that practice makes perfect.

For more information, check out:]

The Logic Pro 10.7 update is here, and along with it is a new era of audio production. Dolby Atmos’ spatial audio mixing is now fully integrated into Logic Pro (as well as some other fantastic...

Logic Pro X is one of the best DAWs out there in terms of versatility. When it comes to vocals, it’s the perfect choice for taking you through the whole production process from recording to editing...