An echoing microphone isn’t great, whether recording live or in a studio environment. In such an instance, you may wonder: why is my Blue Snowball echoing? So what’s causing the microphone to echo, and how can you stop this from happening?

Here are 11 reasons why your Blue Snowball is echoing:

Read on for more information on the reasons why your Blue Snowball Mic might be echoing and ways to rectify this problem.

1. Your Blue Snowball Is Too Close to the Speaker

Also, any noise from speakers or hard drives will usually make its way onto your recording, meaning you’ll have to spend hours trying to edit out each echo soundwave.

The solution to this is to move the mic further away from the speaker.

2. The Mic Isn’t Positioned Correctly on Your Desk

A common cause of echo with a Blue Snowball microphone is that it’s not set correctly for recording.

This affects the quality of your recording because it’ll pick up all surrounding noise and echo to some degree.

Ensure you position the microphone at a 90-degree angle to your mouth, with its front pointing toward your nose. The mic should also be 6 to 12 in (15 to 30 cm) away from you.

This video describes 5 different ways to place your microphone to get the best results:

If you want a professional quality recording that doesn’t echo, avoid recording near any large pieces of furniture or along walls.

These surfaces will provide a natural reflection effect on your audio waveform, causing echoing sounds.

Ideally, try to record in a room with plenty of space around you and far away from reflective surfaces such as walls or desks. For the best results, ensure the room’s floor is carpeted.

4. There’s an Object Between You and the Microphone

As with walls and furniture, any objects lying around you as you record will provide a reflection effect that may cause the mic to echo.

To avoid this from happening, ensure there are no obstructions between yourself and the microphone.

Here’s my article on how to stop keyboard sounds from being picked up using a Blue Snowball mic.

5. Other Devices Near the Mic Are Interfering With It

Electronic devices near your Blue Snowball can interfere with recording, meaning an echoing noise might occur even if everything is positioned correctly on your desk.

The most common culprits of audio interference are phones and radios, so it would be best to turn them off or keep them in a different room when using your mic.

Turn off any other electronic devices to see if this problem persists before contacting the Blue support team to ask for help.

In addition, you may want to try setting up one device (for example, your computer) far away from any others that could cause interference, then testing whether this reduces the amount of echo while recording.

If you’ve tried everything else, but your mic is still echoing, perhaps your Blue Snowball isn’t set up correctly.

Ensure you adjust your input volume on whatever software you’re using to record correctly — try making a sound yourself while the mic is playing back to make sure it works properly and doesn’t pick up a lot of background noise.

Also, ensure your output or monitoring volume is turned down low enough not to cause feedback from your speakers when recording.

7. There’s a Fault With the Mic Hardware

If you’ve tried all of the previous solutions, but your Blue Snowball mic is still echoing, there may be a hardware problem after all. That said, you’ll need to have an expert inspect it.

Get in touch with the Blue support team for further assistance before attempting any DIY repairs on your own.

Sometimes, echo doesn’t occur after the initial sound wave but appears as a delayed version. If your Blue Snowball is picking up even a fraction of a second of an echo after you speak into it, then this could be what’s happening.

Check that the ‘Listen to this device’ button on your recording software isn’t turned on — if this is the case, your voice will play through the speakers attached to your computer and cause an undesirable echo effect.

You should also check that any plugin effects such as vocal removers or equalizers aren’t activated for similar issues.

9. There’s a Problem With Your Computer or Its Settings

If the Blue Snowball is echoing with no other problems in sight, then there may be an issue with your computer or its settings.

Ensure the volume controls on applications such as Skype and Discord aren’t turned up excessively high, which can cause unwanted feedback if the mic picks them up.

If you’re using a Mac, ensure any input gain adjustments made through System Preferences are controllable while recording. Some gain settings will only work when playing back audio rather than recording it.

10. Some Background Noise Is Drifting Into Your Recordings

The echo can be caused by background noise, such as fans or music bleeding into the recording.

Make sure your mic is positioned as close as possible to you and that there aren’t any other sounds nearby that could disrupt your voice recordings’ cleanliness.

Additionally, try using a noise gate plugin or recorder software such as Audacity to reduce background noise during pauses in speaking — this is especially useful for noisy offices with constant low-level chatter.

Check out my other article on how to reduce background noise on a Blue Snowball mic.

11. Your Speakers and Microphone Don’t Match

If your Blue Snowball is still echoing after you’ve tried everything else, this may be a sign that there could be a mismatch between the kinds of sounds it’s picking up between your speaker and mic. This can be caused by issues with different frequency responses, such as compression or volume levels.

It would help if you aimed to use similar equipment that will result in a suitable combination, for example, using professional quality studio monitors rather than regular PC speakers to record voice messages.

Here are two studio monitors on Amazon.com worth considering in this case: 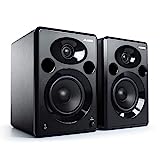 Check out my article about whether Blue Snowball is good for recording music.

Additionally, you can use software like Adobe Audition to remove frequencies that overpower the mics or speakers being used. This process will depend on what kind of equipment you have available.

For more information, check out which is better: Blue Snowball vs. Razer Seiren Mini.